In the main menu of Railway Empire, there is a button called “Editor” which will lead you into the modding section of the game. There, click on the “+” button to create a new scenario. Besides, there is a “Manual” button in the bottom right corner which leads to this tutorial. 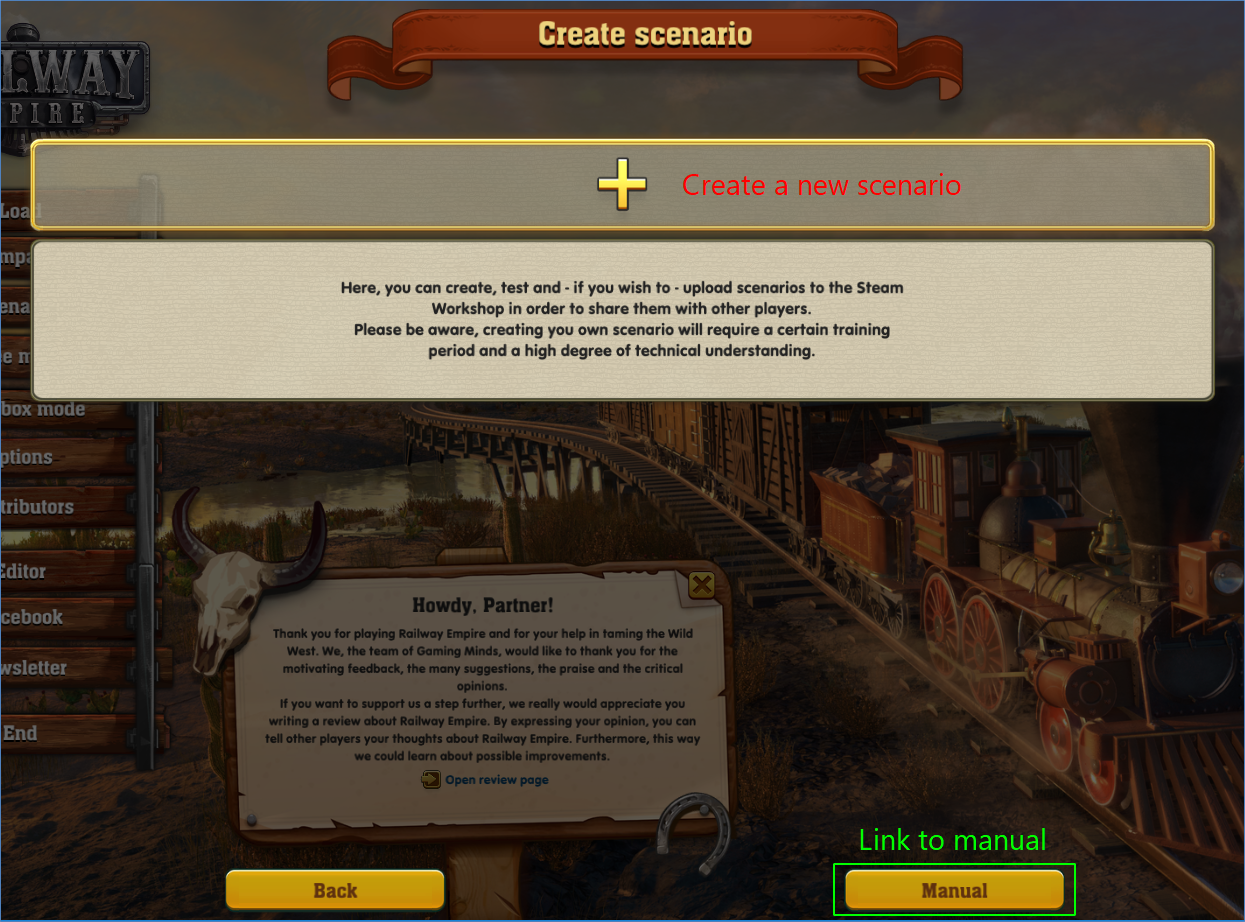 After clicking the “+” button, can edit the general settings of your scenario. Enter your name and description here, which might show up later in the Steam Workshop. Additionally, you have to select a region, the era and the language of the scenario.

Confirm by clicking on “Create” (bottom right) and your scenario will be created.

In the background, a new folder has been created for your scenario. You can find it here:

If you would like to create a backup, you can simply copy the whole folder or only the (Tiled) *.tmx and (Tome) *.tproj files to another directory. So, in case of an emergency, you can replace the corrupt data.

Within Railway Empire’s editor menu you will have the following options:

As soon as you have adjusted everything in Tiled and Tome according to your wishes, click on the fourth button to validate your data. If the program detects no errors, you will have the following options:

It is recommended to test your scenario before uploading it. In a similar manner, it should be wise to check your scenario for possible errors (4). As soon as you have uploaded your scenario (7), you are able to find it in the Steam Workshop (http://steamcommunity.com/app/503940/workshop/).

You are not only able to upload your scenarios to the Steam Workshop, but you are also able to download the scenarios of other players. These scenarios will appear in the “Scenario selection” screen of Railway Empire:

You can identify custom content by the Steam attached to it. Please keep in mind that we will not test those scenarios and thus, we cannot guarantee their integrity.

Another quite neat feature you might want to make use of, is the possibility to exchange the representing image of your scenario, which will be displayed within the Steam Workshop. The image has a resolution of 1280×720 px and can be edited with any image editing software of your choice. The file size should not exceed the limit of 1 MB. After you started Railway Empire at least once, a *jpg file should be created which can be overwritten. It is located here: